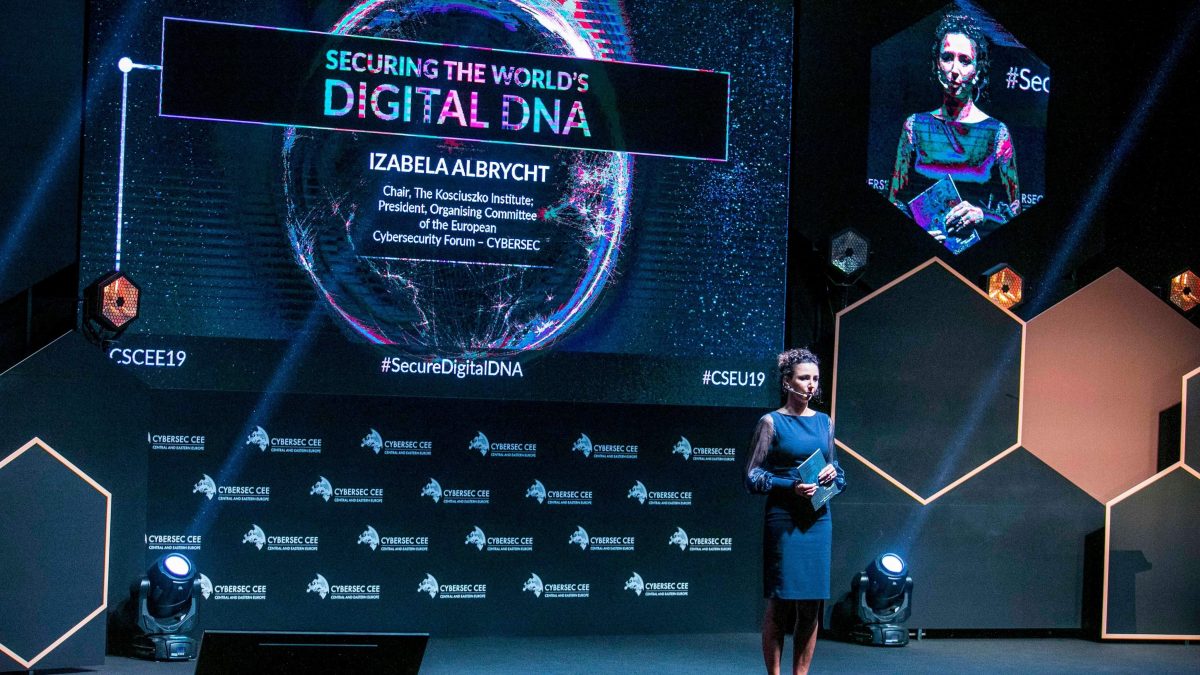 Although the weather is getting colder outside the window, the days are shorter and the motivation to work seems to be slightly lower, the IT industry is not slowing down. In the last week of October, CYBERSEC – V European Cybersecurity Forum, which is one of the largest events raising cybersecurity topics, was held in Katowice. This year’s theme “Securing the digital DNA of the world” attracted over 150 speakers from around the world.

The motto is not accidental, because it is behind the organizers’ appeal to members of the industry, talking about the importance of shaping the digital industry in a responsible manner – respecting users’ privacy and in accordance with the principles of cybersecurity.

The forum began with a ceremonial opening, during which letters were read in turn by President Andrzej Duda and Prime Minister Mateusz Morawiecki. The Minister of Digitization, Marek Zagórski, also spoke.

In his letter, President Duda emphasized that the security of the digital market is one of the priorities of the Polish government, and also one of the biggest challenges. He also noted the importance of the 5G network:

“Due to the likely significant impact of the 5G network on the development of the Polish economy in its implementation, the priority should be to ensure cybersecurity, while guaranteeing the provision of an appropriate technological level.”

Prime Minister Morawiecki also took the floor in his letter raising the topic of the newly adopted cybersecurity strategy of our country. The Cybersecurity Strategy of the Republic of Poland for 2019-2024 is a document that sets out the strategic goals of the Polish government in the field of cybersecurity, taking into account new challenges related to technological development. Prime Minister Morawiecki said the following about the document:

“Digital market security is one of the priorities of the Polish government. Its importance for national security, social and economic development is indisputable. That is why the statutory regulation of the construction of the national cybersecurity system was so important. The Council of Ministers has recently adopted the Cybersecurity Strategy of the Republic of Poland, which sets out the main lines of action over the next five years. The next step will be to develop a strategy implementation plan.”

In turn, Minister of Digitization, Marek Zagórski, emphasized in his speech how important it is to organize events such as Cybersec, in view of the growing requirements of digital security:

“Education, international cooperation and exchange of information are key here. Without this, in the modern world, no country can achieve self-security in cyberspace and protect itself against the dangers of the network.”

On the first day of the Forum, the European CYBERSEC Award was handed out. The European CYBERSEC Award is an award for services to the development of cybersecurity as part of national, social and economic security. This year, Estonia was awarded “for the work it has done to build trust in cyberspace and secure the digital DNA of the world, as well as support for the 3 Seas Digital Highway project – an initiative to build digital infrastructure along planned transport routes and power lines.” Ambassador Martin Roger received this award on behalf of the President of Estonia, while the president’s thanks have been broadcast:

“States can not guarantee the security of internet systems alone. To be able to think about applying analogue law to cyberspace, we need to work out a common agreement on the international stage,” said President Kersti Kaljulaid.

Public and private sector and cybersecurity

The agenda could not lack discussion panels, divided into four paths: State, Defense, Future and Business. Discussions began with consideration of cybersecurity in the private and public sectors. Particularly noteworthy was the speech of Robert Muggah, Director of the SecDev Group and Co-founder of the Igarapé Institute, who noted that cities of the future will be safe only if local government decision makers provide adequate protection against cyberspace attacks.

Nigel Ng, Head of RSA, the organization that hosts the largest cybersecurity conference, opened the Business Path. During his speech, Nigel Ng spoke among others on how to manage your business to protect yourself from digital threats.

5G in Europe – an agreement for cybersecurity

In recent months, the 5G network has generated a lot of interest in Poland, which enables very fast data transfer – according to some sources it is even up to 10 gigabits per second. A number of agreements have been signed in recent months regarding the construction of the 5G network – among others, between the USA and Poland and Romania. During the CYBERSEC Forum, a declaration was signed on the construction of 5G network by Estonia, and, importantly, Ericsson, Cisco and Nokia have signed an agreement with the Ministry of Digitization for cybersecurity.

The future of 5G network in Europe is a topic widely discussed during the conference – during the panel discussion, representatives of Poland, the USA and the European Union jointly considered the opportunities and threats regarding the construction of the 5G network. Although it is obvious that the introduction of the 5G network will have a very positive impact on the development of technology and key sectors of the economy, such as energy, banking, health or insurance, it is worth approaching this kind of transformation with caution. One of the problems pointed out by the speakers is the differences in the levels of infrastructure and the legal status of countries that have decided to implement the 5G network, which leads to the need to introduce standards and unify digital markets.

The panel called “Business” could not lack representatives of the financial and insurance sector. Paweł Surówka, President of the Management Board of PZU SA, drew attention to the fact that the above industries play a key role in the digital transformation process, due to the high level of regulation and experience in risk management. Przemysław Kania, Cisco’s Managing Director, drew attention to the need to standardize security systems in the process of developing the Industrial Internet of Things. Although, as he says, the Internet of Things opens up new, huge development opportunities, it should be remembered that at the same time it can become the Achilles heel of interconnected IT systems. Once again, the call for cooperation between the private and public sectors has been raised, which will allow for equal opportunities in the fight against cybercriminals and fraudsters lurking for the occasion.

General Robert Spalding, former adviser to President Donald Trump on China, opened the second day of the conference. In his speech he drew attention to the problem of personal data protection. According to Spalding, the lack of knowledge about who uses our data and how is a threat to our freedom. General Spalding also took up the topic of the US political relations with China, with particular emphasis on the development of the 5G network in the Middle Kingdom.

The discussion within the “Defense” panel was also interesting, under the slogan “Alliance Security – Joint Efforts to Increase Digital Defense Opportunities.” Under this somewhat long title is the need to develop standards, intensify actions and respond to cyber threats within NATO structures. Panelists noted that in addition to theoretical assumptions, it is crucial to create operational capabilities in the field of strengthening cyber defense, as standards are useless when there is no practical possibility to implement them.

The panel also discussed the need to educate citizens and organizations as part of raising awareness about new threats. John Frank, Microsoft’s Vice President for Government Relations for Europe, spoke about specific responsibility in this aspect:

“We present technology to the world. That’s why we need to make sure that our products are used safely.”

The discussion panel entitled “Future” focused on technological development and its implications for the competition of countries on the international arena. Jacek Bartosiak, Founder and President of Strategy & Future, author of the best-selling books on geopolitics and warfare, accurately summarized the problem:

“We are entering a new, unknown reality in which the Internet has changed the way we communicate. We are beginning to be aware of the dangers, polarization of the world, as well as emerging new planes of competition. If Europe decides not to consolidate, which it has never done so far, it will be in a critical moment, and its future will depend on the outcome of the rivalry between China and the US.”

One of the components of the Forum was CYBERSEC Expo, i.e. a fair of products and services from the cybersecurity industry. Among more than 50 exhibitors, technological giants like Microsoft, Cisco, Google or Samsung had their stands. The Cybersec Mil reconnaissance robot enjoyed great popularity among the guests. It plays the role of a “scout” – it is used to check rooms or areas, which increases the level of security of soldiers during the action. Samsung, in turn, showed the Pulsar armchair, which, thanks to VR technology, imitates flight by plane. Pulsar, together with Nokia’s solution – visualization of a tennis match attracted probably the most interest of visitors. It is also worth mentioning our native stands – the City Hall of Katowice presented one of the largest joysticks used to play the popular Pac-Man game, and the Museum of Computer History and Computer Science prepared an exhibition of old computers on which the cult game Prince of Persia could be played.

We thought about the right punch line of this text, but we decided that the entire account was best concluded by the words of Przemysław Kucharzewski, Vice President of Cypherdog:

“The CYBERSEC forum is a rare combination of technology and business. In every speech, every debate and lecture there was a desire to cooperate and change for the development of cybersecurity in Poland and in the world. The international nature of the event means that the level of discussion and content is extremely high, and the organizers’ professionalism is inspiring when planning similar industry events. The creation of four thematic paths turned out to be a great idea – thanks to this the participants looked at the issue of cybersecurity from different, seemingly contradictory perspectives. CYBERSEC shows that the cybersecurity dialogue is ongoing and is getting better every moment. Both the great world of technology and the authorities at the forefront of EU and NATO countries have a real desire to develop cybersecurity standards, and this is deeply optimistic for companies such as Cypherdog because it shows that we are not alone in the fight for the security of digital space.”